In times primordial, long before memories and dreams, the Hungry Ocean began to take big bites out of the Land. Each bite would rain a myriad sandy crumbs on the shore, after which he would crunch mightily, churn heartily, gulp deeply and … move along to take the next bite. And along to the next, and along again to the next, like a child chomping a corncob, each bite leaving a perfect smile on the coastline. From one end to the other, Ocean took … oh, I don’t know, maybe 40 or so bites. Then He was satisfied. And that, my friends, is how Sydney was made.

The golden Hawkesbury sandstone that forms the Sydney basin and surrounds was deposited alluvially 200 million years ago – and its grain is ideal for carving. From its quarries generations of masons have chiselled the countless gargoyles, friezes and church spires that charm the city’s skies. At the shoreline the pounding Pacific is the sculptor; carving sandy crescents each book-ended by two formidable headlands; the equals of any cathedral. Gaze long enough at any of these craggy bluffs, or at the indomitable escarpments that guard the city’s west, and you will see faces; aboriginal ancients watching over the city, at times frowning at what has been done. 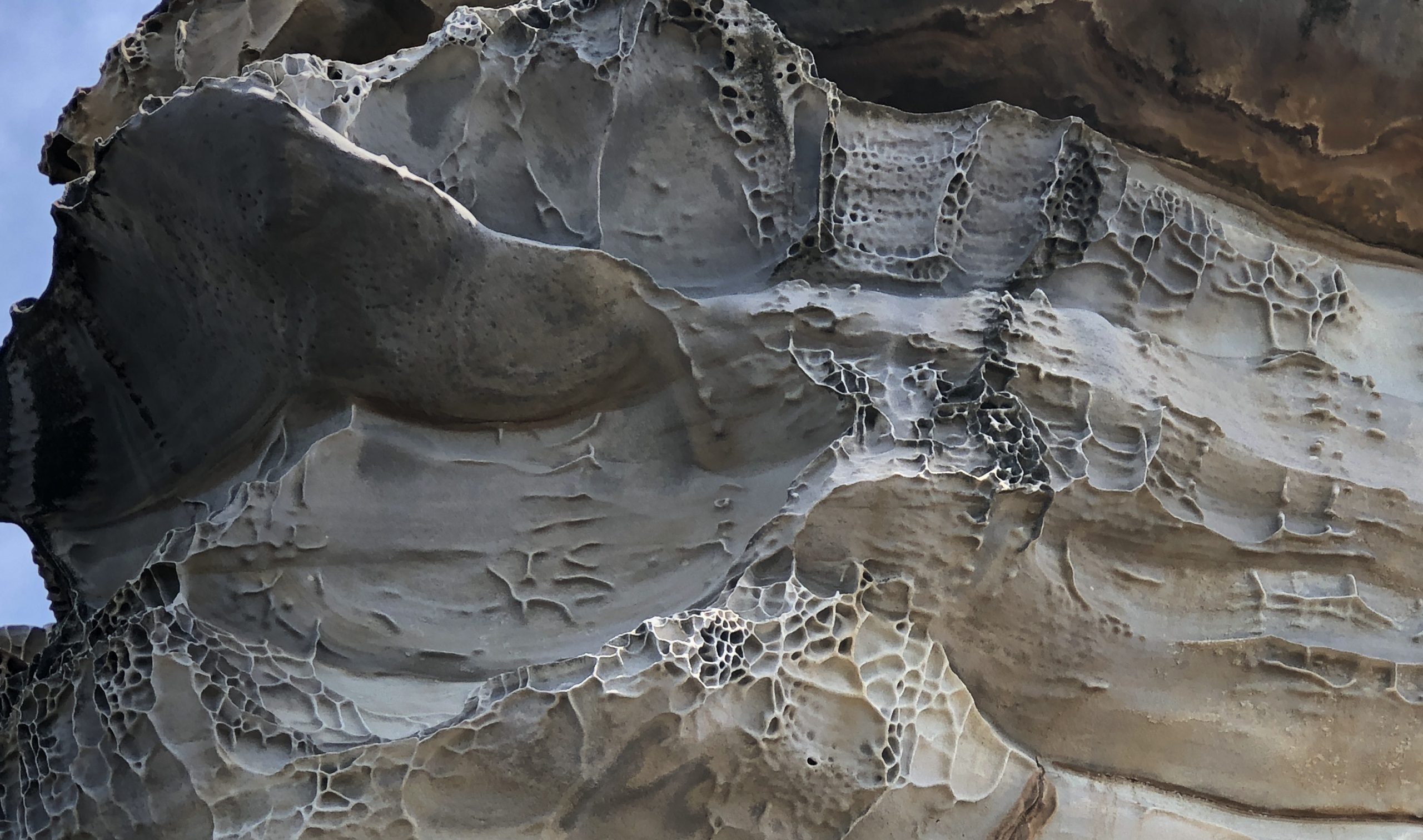 Howling southerlies and receding estuaries have engraved a riot of honeycombs and marbling everywhere on the rock. No place here is artless. In any of Sydney’s infinite parks, secret gardens and laughing beaches, you can be bewitched by the wild striations and dancing patterns that geology has wrought, fibrous sunsets of blazing orange and swirling wine. Sandstone accepts the forge of time and tide, and leaves you stupefied by its beauty.

Bounded between each pair of cliffs, the beach defines its community. Pick any beach and you will find: one sea-pool where the tribe gathers for its morning laps and trivia. One surf club to mark the team colours and defy the neighbouring beach-tribes in hot competition. Beach gives way to street, bustling with coffee and commerce. And then, perched on hills behind are the labyrinthian suburbs; each named after the beach that birthed it. If you live in Avalon, to Avalon you belong. Your children will wear its emblem and on the sand they’ll bear the flag, each weekend, learning the life of grommets. And then there’s the Bondi Icebergs, the Bra Boys – how many beach-tribes bond in clubs, compete on sand or swell, surfing according to their own break, bar or reef? In Sydney, sandstone borders ordain our identity. A society whose destiny was told in the rock.

But this strikes me as no small historic irony. Just a twinkling of an eye ago colonisers came, filled with the hubris of ‘discovery’, determined to claim mastery over this forbidding land. An unremarkable sandstone (of course) pile casually marks the spot, like an afterthought, where the first unhelpfully dressed and clumsily shod Briton stumbled ashore. His compatriots soon followed in swarms, meaning to tame every hill and plain, to ‘civilise’ and subdivide the land as people of Empire are wont to do. By God’s decree and Royal Seal, they appointed themselves ‘in charge’. 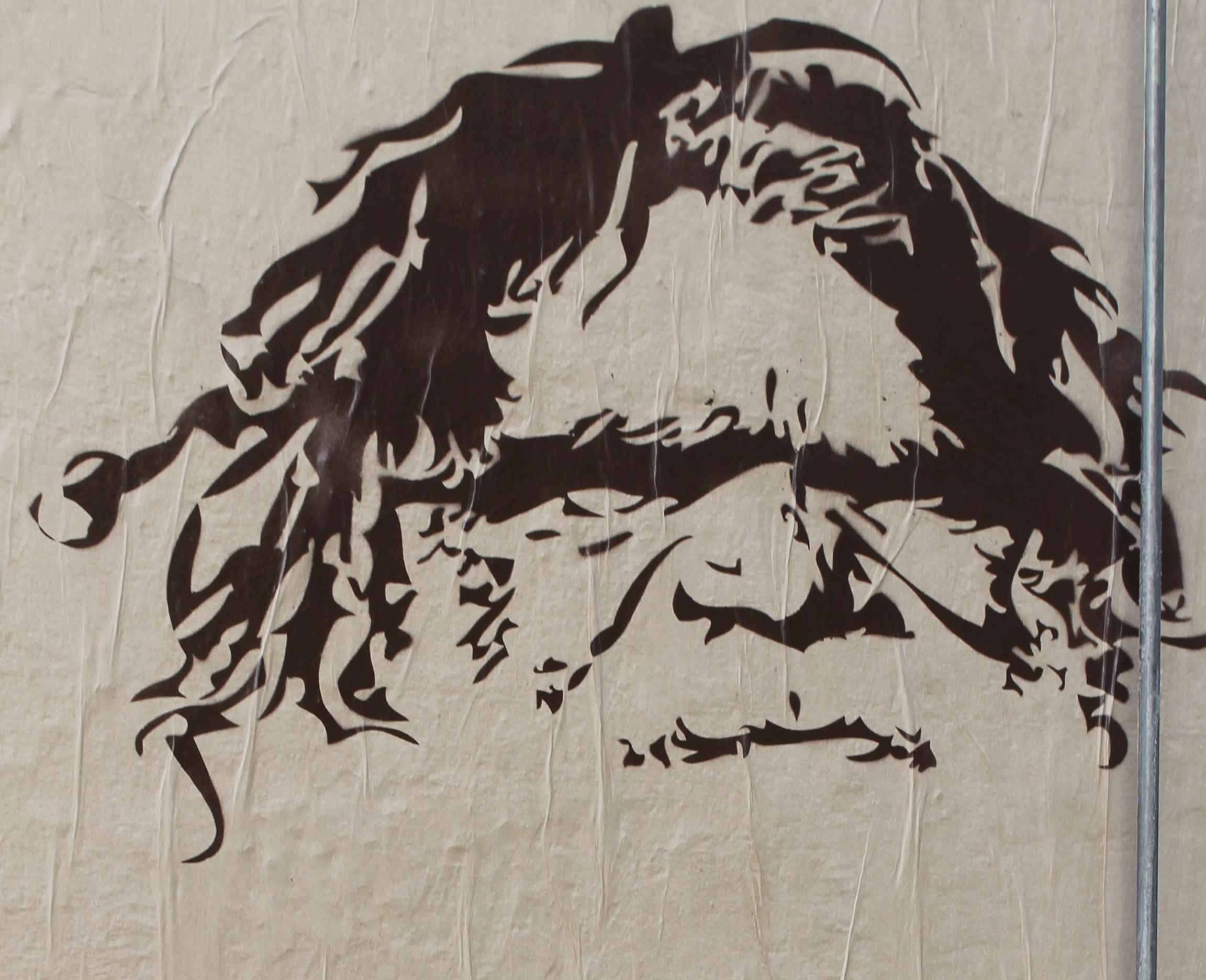 In stark contrast to the first friends of this land; fellows of the ecology who hunted sustainably, who managed fisheries, who raised grains, who fire-tended grass and forest as equal partners in the Great Circle, the newcomers were playing to win. To extract. To dominate and overcome. There is great pride in denuding forests, gouging great pits, overgrazing naked land cut into rectangles. And pathos in renaming everything for nostalgia, with melancholic references to long lost locales in a faraway home. And yet, for all the triumphal claims of dominion, there is no escaping the rule of country. Geology commands sociology. Topography makes the people and wherever we go we will be the children of the land. I wonder how many can see that. Sydneysiders are, at the root, the People of Sandstone.

As one of Sydney’s sons, I may never understand or fully appreciate the relationship of this land that I love to its first people; those who knew they were a part of, not the lords of the soil. But it brings me a smile to reflect that, know it or not, sooner or later the land makes us. There is no escaping it. The land names us, gives us our character – and we were never in charge. 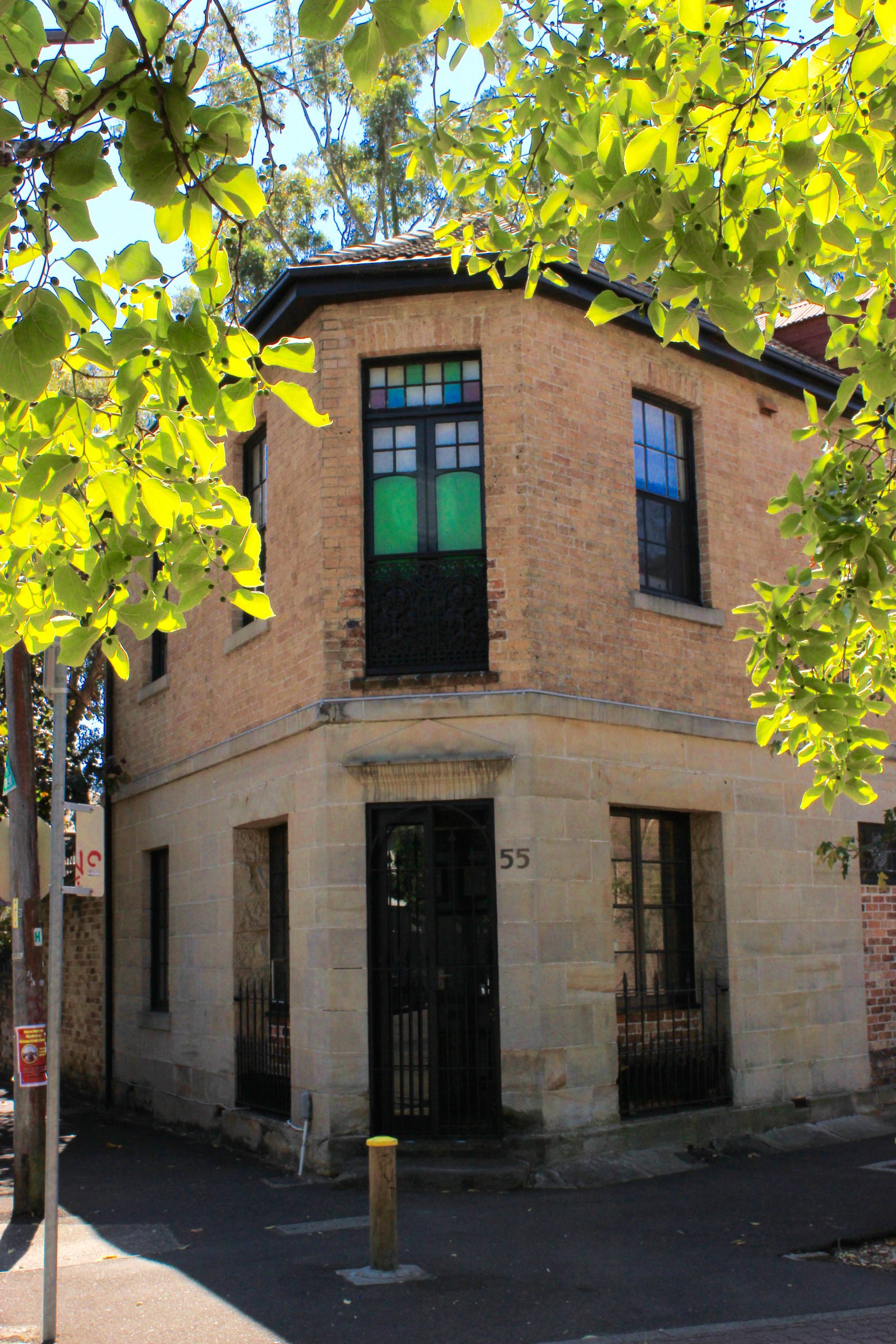 With time, sandstone country came to claim me. I was brought here from South America as a 9 year old boy, and I remember how alien this land seemed to me then. I thought I could never come to love it. Little did I know. I was wooed slowly, while disappearing for entire days among the gums and waterholes of Ku-ring-gai Chase, strolling through the Harbour foreshore parks, photographing weather-beaten churches and shabby old corner stores. I was smitten by the way Sydney’s giant Birra Birra weave their roots around boulders. Enchanted by the quarrelling of fruit bats at dusk. Beguiled by the maze of laneways and stairways, steps worn to coolamons by the tread of ages. No-one can know all of Sydney’s magical nooks, waterways, creeks, mangroves and tributaries. This city harbours too many surprises to catalogue, whispering its stories of struggle and celebration from every blessed stone. In time, I too became one of the Sandstone people.

Growing up in the Harbour City, Sydney just made sense. It was the centre of the world. Of course it had to be rent in two halves, stapled by a giant steel coat-hanger. Of course one went to the beach on weekends – it’s just what you do! Magnificent as this world may be, Sydney is surely its central point of reference. In my brain, Sydney was the Greenwich from where all else is measured. Ground zero for all of Life. Like the Port Jackson Fig’s mighty roots enfolding an outcrop, over decades the synapses in my brain were wrapped around the feel of this city. A cortical map faithfully reflecting Sydney’s disorderly streets and lanes. We grew into each other. 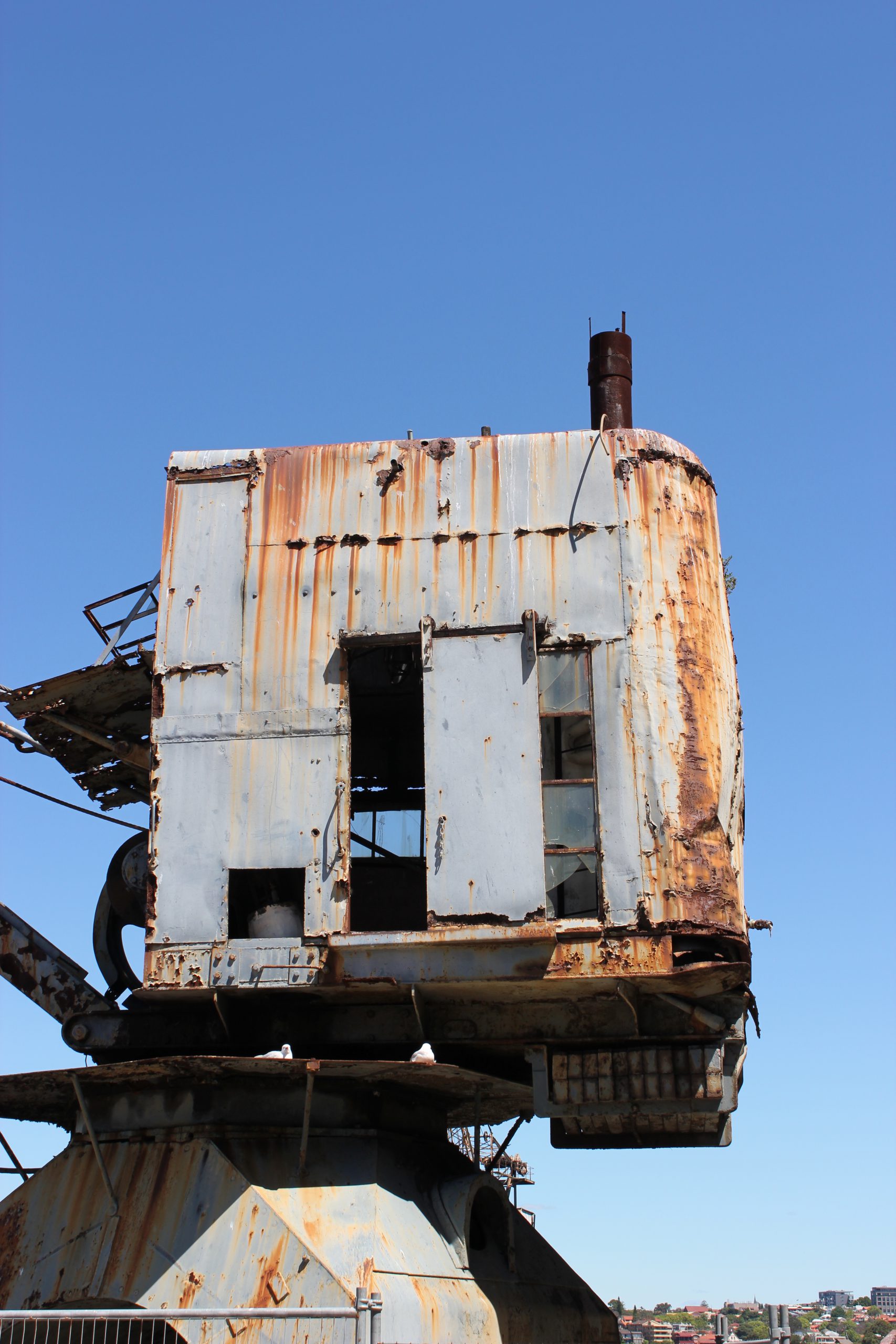 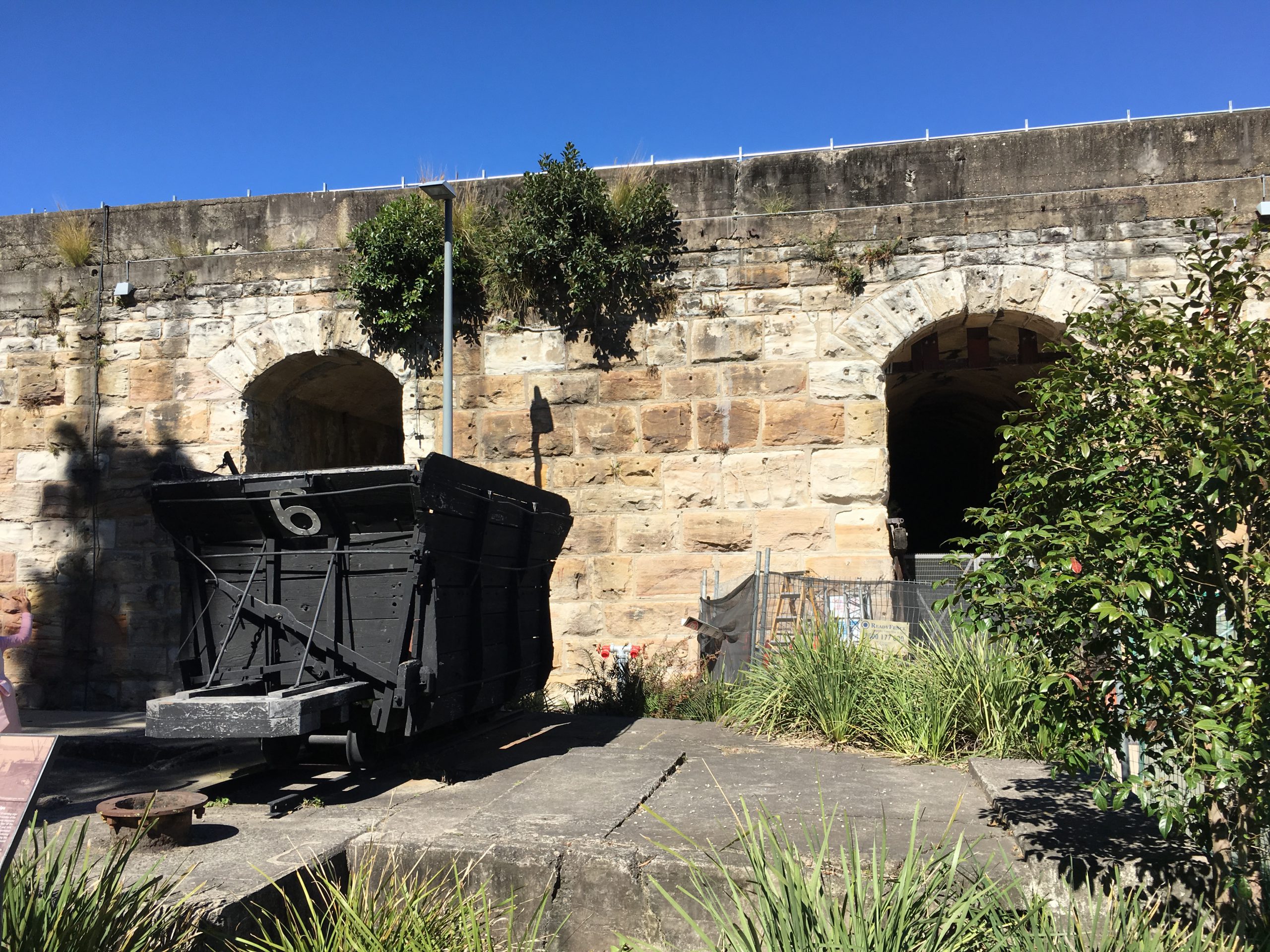 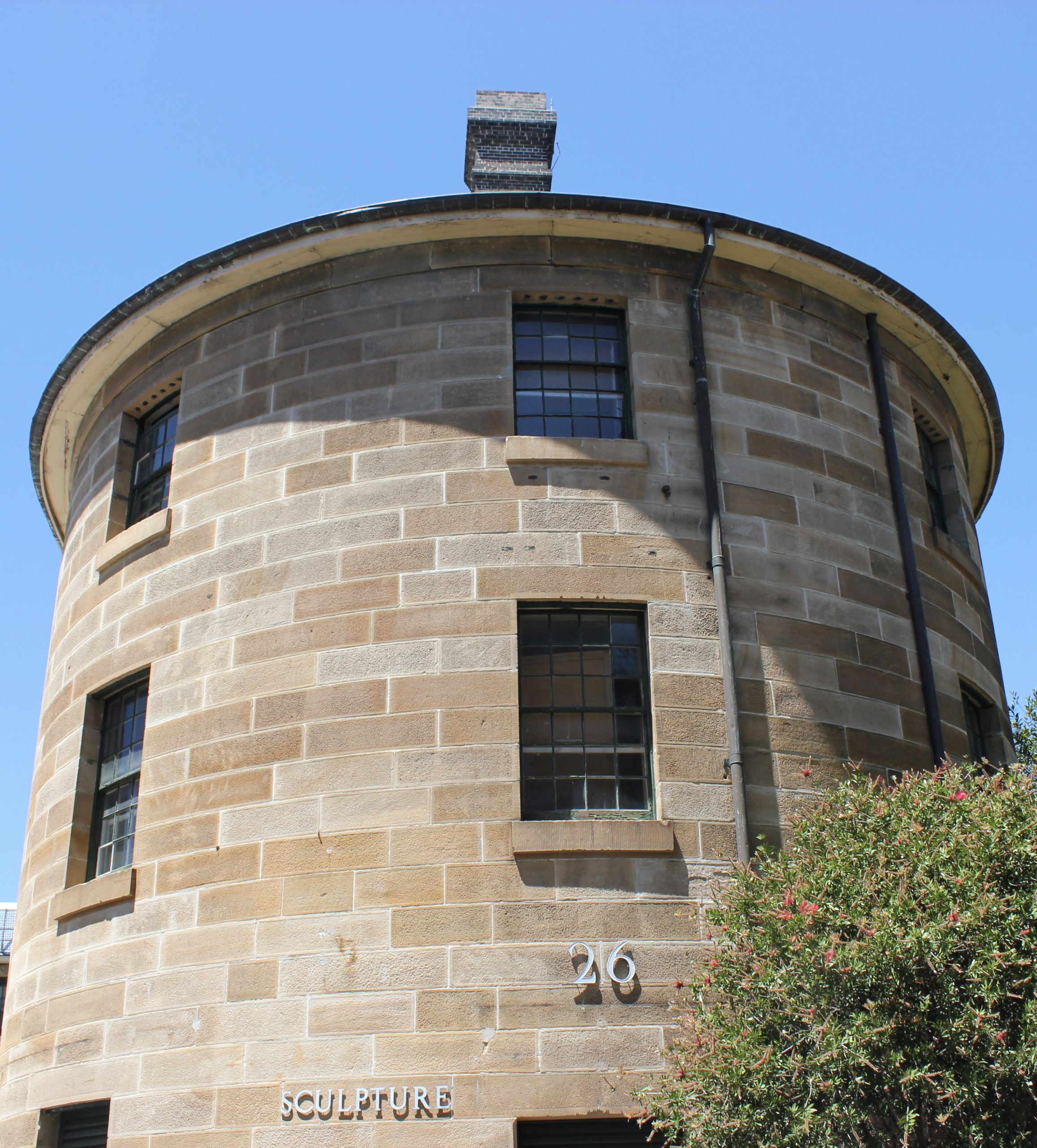 I even grew fond of its wrack and ruin, its rust and decay. I had fallen in love with the untidied leftovers from its ignoble past, the detritus,the myriad stories whispered by ghosts in gutter, eave and peeling paint. Ugly industrial scapes gain such dignity once relieved of their purpose.

When the time came for Linda and I to leave Sandstone Country, a dark hollow appeared in the pit of my belly. The very air smelled of loss, as if a part of me was gone forever. Wherever else I wander seems foreign to me. Leaving sandstone country, we are now passing through a land of granite, where great volcanoes sleep. And I can’t shake a ghostly feeling of being lost. The startling screech of sulphur-crested cockatoos and the annoying wake-up call of kookaburras are absent in this place, where once more I am a stranger. Familiar voices missing from the sky.

I never imagined that losing a land might feel so similar to losing a person. A family. Attachment to place, and the peculiar grief that followed really took me by surprise.

It’s not like I hadn’t heard that this happens to some people. I’ve heard all about it in the many ballads and laments that pine for faraway homelands. I just did not calculate this feeling would happen to me.

And why did I think I would be exempt? Modern life seems hypermobile. Everywhere people are on the move. Every family in diaspora. Interstate at the drop of a pay-rise. Across the seas at a whim. Like cars and undies, our homes and neighbourhoods are disposable. Neighbours are recyclable. How to think about it? Are we the uprooted, the dislocated – or perhaps the planetary-indigenous? At any rate, the Brave New Neoliberal World reads this way: don’t love your land too much, don’t know it too well – it is a temporary convenience, you will trade it in. My culture – Homo Disjunctus – brushes-off the attachment to place as mere sentimentality. Happily, I take no instruction from an eco-phobic culture that thinks nothing of felling the Sacred, that found its ‘success’ through the suppression of emotion, the denial of interconnection, the killing of listening. Aha. Maybe that explains how Australia’s industrious forefathers could tear entire nations screaming from their soul-country, with such icy indifference and conviction. What you don’t feel, you don’t see.

When Linda and I set-off on our journey, we did so willingly. We were not evicted. We have each other, our friends at the push of a button, our comforts. We were not threatened, we don’t seek refuge. For all its pains and pleasures, our trek is an adventure. My grief is not a burden, I value it. Sadness has a sweet centre. I feel blessed to have loved enough to know this bereavement. But this gives me pause: if this is how it pains me, not born of Sydney, of distant ancestry, to be gone from my home town … what manner of emotion must burn in the hearts of those whose ancestral presence remains behind, who witness the rape of their country, who bear the insult and the terror of expulsion? I cannot imagine. Maybe I dare not imagine. I lived and thrived where they once belonged. Today I shudder. Many of my forebears, Mum and Dad included, had to pack and leave in a hurry, pale with fear. I doubt a comparison can be made. All the same, I feel I am being taught a little more today, about what it means to entwine with a place, to trust it, to love it. And, denial notwithstanding, how irrevocably we are creatures of the soil. Truly, madly, deeply.

I learned to love a strange land once before, and I know I will again. Somehow. I suspect that listening deeply and watching quietly may be good recipes for learning to love again. Every land speaks a language, sings its own song. Finding a new home will be its own adventure, unknowable for now.

So, what next? Like all stories, this one unfolds, keeps teaching me new things. So please stay tuned, Part 2 is coming. With a twist, and a turn. Soon.

Meanwhile, how about you? What does home mean to you? Are you there now? Or is there a land you miss? Do you get misty-eyed when you hear a song from your ‘homeland’? Is there a place you feel nostalgic for? I would like to hear your musings. Most of us are migrants, or descendants of – what if that makes us all one tribe, the ‘lost tribe’ perhaps! Or planetary wanderers? Please feel free to share a line or two, your thoughts and feels.

This entry was posted in Uncategorized. Bookmark the permalink.